A Sunrise Hike On Mount Batur 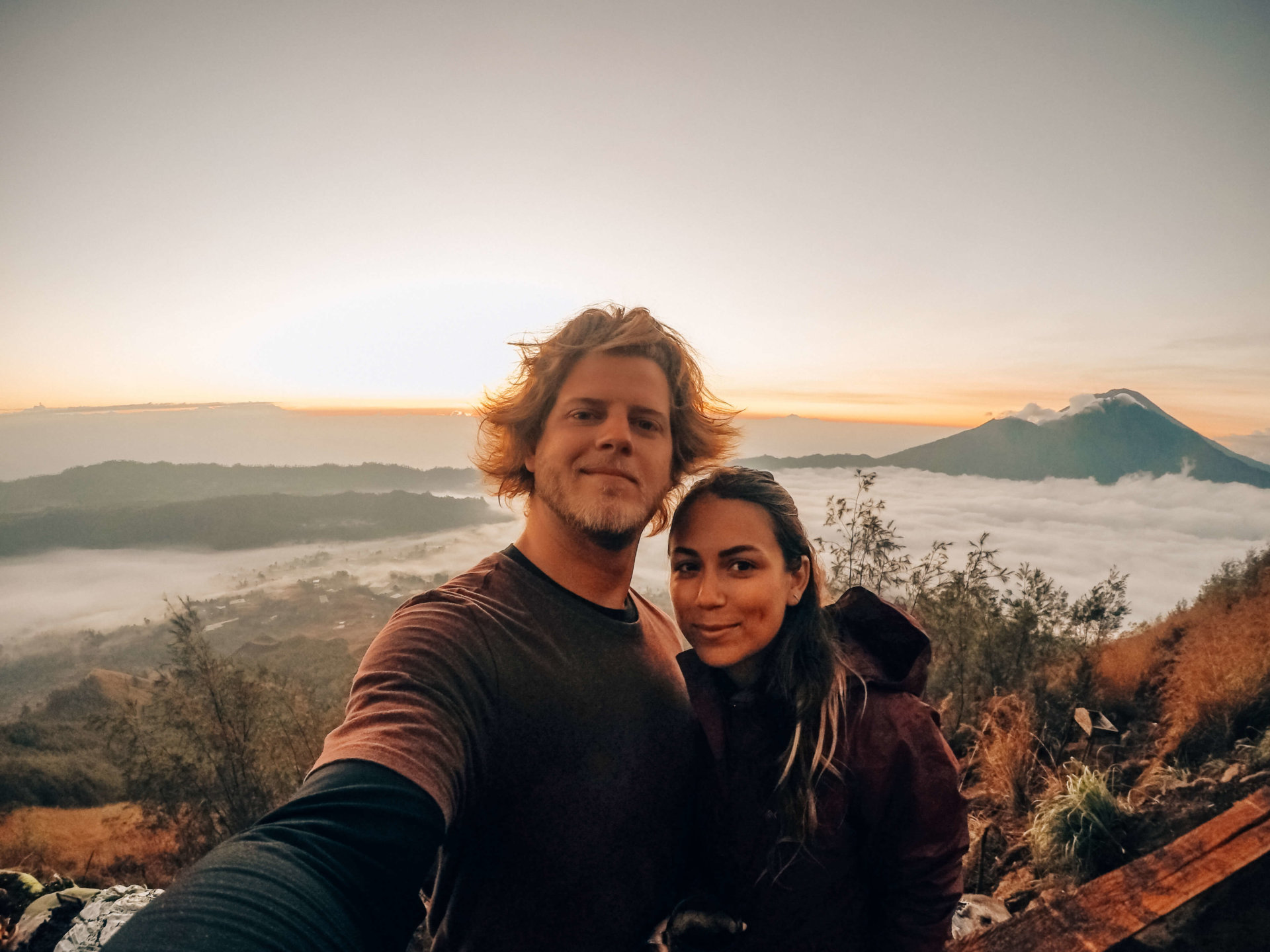 We silently sipped our coffee as the sun began its brilliant ascent over Bali. We were sitting on top of Mount Batur, one of Indonesia’s most coveted sunrise-watching spots. A shiver ran down my spine. Was it from the wind or the mesmerizing scene in front of me? I’m still not sure. It was just past 6 a.m., yet we had already summited a 5,600-foot volcano.

That’s the kind of morning you can expect to have in Bali.

One year before Guil and I set foot on the Indonesian island we knew we wanted to hike up Mount Batur, an active volcano in northeast Bali. The popular trek begins in the deep of night, giving adventure-seeking travelers a chance to catch a sunrise like no other from its peak. Those determined enough to conquer the trek will also find an unparalleled view of Mount Agung at the top. The nearby volcano, whose eruption grabbed headlines last year, towers over the surrounding landscape. 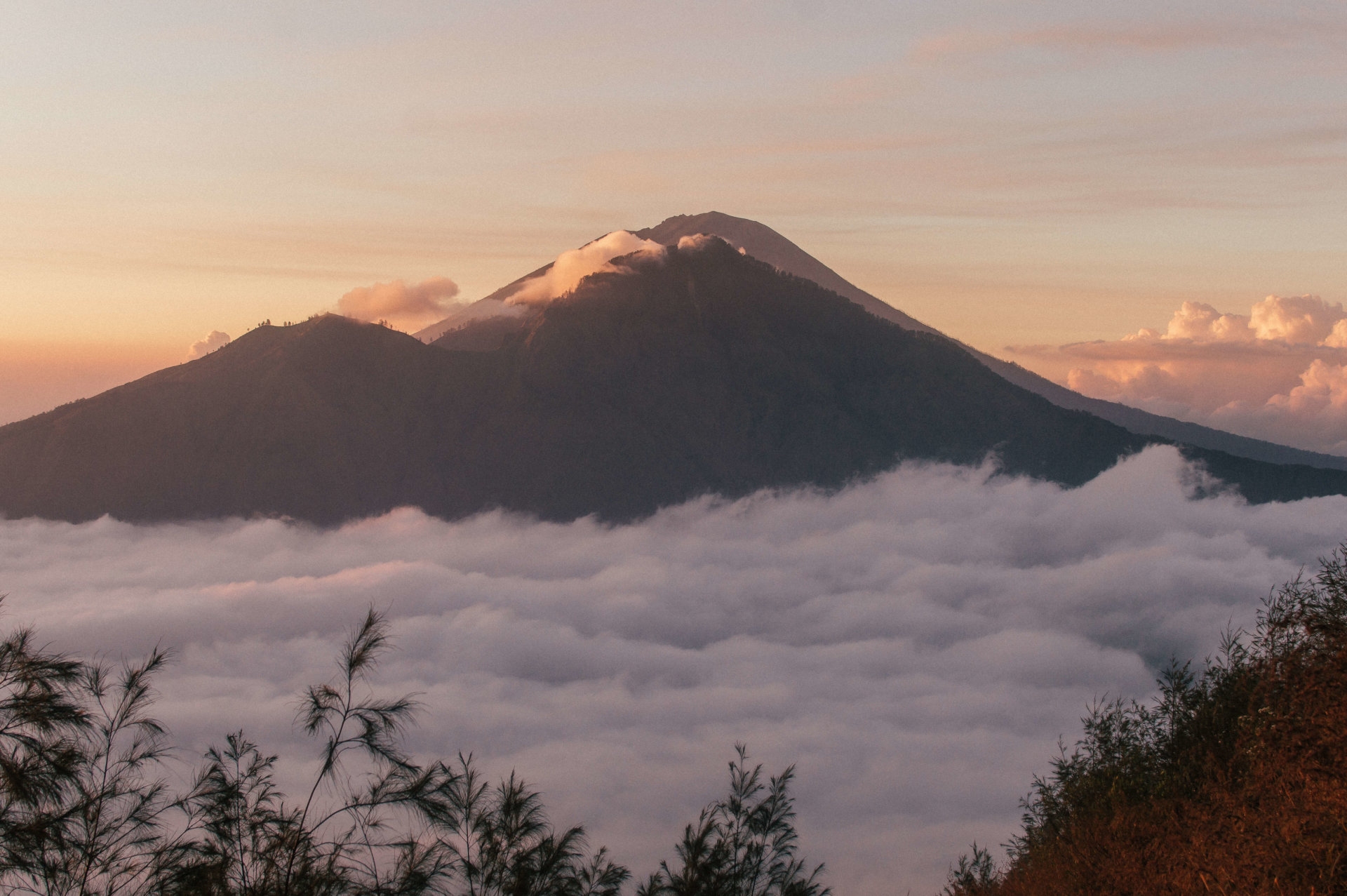 Guil and I went to bed early the night of our hike. At 2:30 a.m. a driver picked us up from our hotel. We were taken to a mountain lodge where warm coffee and tea was served. Fueled with a fresh dose of caffeine, we began our hike at 4 a.m. We booked our hike with Bali Sunrise Trekking and Tours, which led us through a private path stemming from its hotel at the base of the volcano.

We heard the traditional path is quite crowded with other hikers so we were happy with the more exclusive route. Our guide assured us we had more than enough time to reach the top before the sun made its first appearance. Showtime was at 6:30 a.m. There was one tour guide for every four people, which we also liked, considering we’d be hiking through unknown terrain in the dark for the next two hours.

Guil and I were joined by a couple from Singapore, and fortunately the four of us seemed to be equally fit. So much so that when we reached a fork in the trail that separated the easy path from the tough one, adrenaline washed over us and we chose the latter. “This way is steeper, but it’s a shorter hike,” our tour guide said. “So we’ll get there faster?” we asked. Our greatest fear was to miss the sunrise because we were too slow. “Most likely,” our guide responded.

For the next hour and a half our calves, knees and ankles would hate us. The path was not only steep, but consisted mostly of loose rocks — not ideal for a night hike. Armed with powerful flashlights, we set off to conquer one of the most exciting treks we’ve done. We couldn’t see a thing, and we hoped our hiking boots wouldn’t fail us.

We were focused solely on the ground in front of us, which made the final destination that much more breathtaking. Because we had no idea what awaited us at the top. The hike was more strenuous than expected, but we pulled through (with quite a few water breaks). “30 minutes left!” our guide shouted. We were almost there, and it was still dark. We were going to make it! The countdown continued until there were only 5 minutes left before reaching the peak. 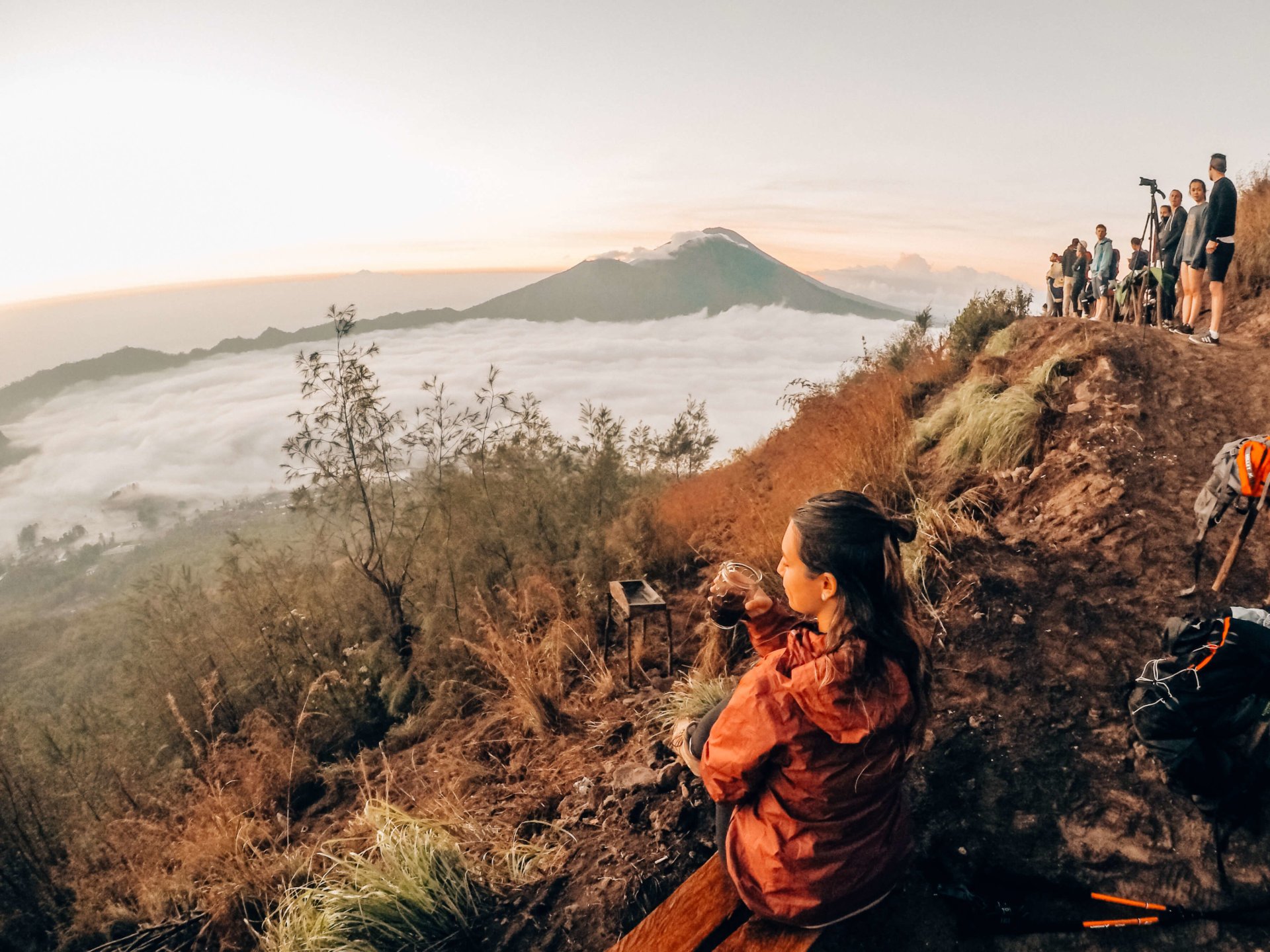 The first signs of a new day began peeking through the blanket of white clouds. We could now see the dark outline of Mount Agung, a giant materializing in front of us. The bone-chilling wind at the top kept us huddled close together. We were given a much-needed large cup of coffee and a boxed breakfast that consisted of a sandwich, hard-boiled eggs and fruit. We were surprised to find so many other hikers there. It was as if every tourist in Bali had decided to conquer the mountain.

Yet it was easy to find our own spot, where we felt like two of very few people watching this spectacular sunrise. We laid our blanket on the ground and waited for nature’s finest act to begin. It may have been the best picnic I’ve ever had. As the sun creeped up over the clouds, the landscape turned from gray to fiery orange.

We could now make out a village, a large lake and the ocean in the distance.  Boy, were we high. The verdict: Mount Batur was definitely worth the few hours of sleep we lost. It’s a small sacrifice for a grand reward. We returned to our hotel feeling proud and hungry, just in time for a second round of breakfast. There’s nothing like the sense of accomplishment you feel from climbing an active volcano before 10 a.m. Talk about a productive vacation. 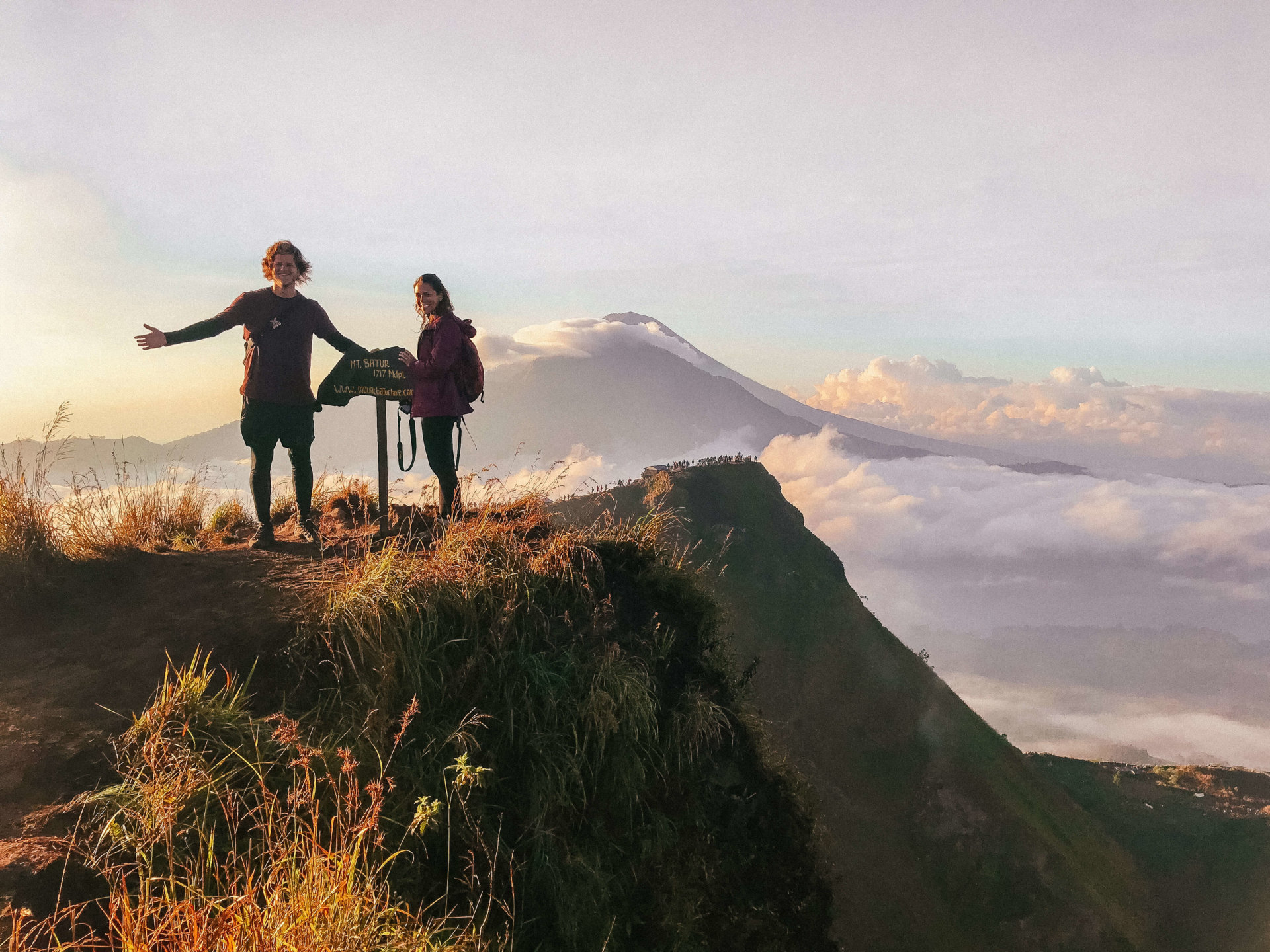