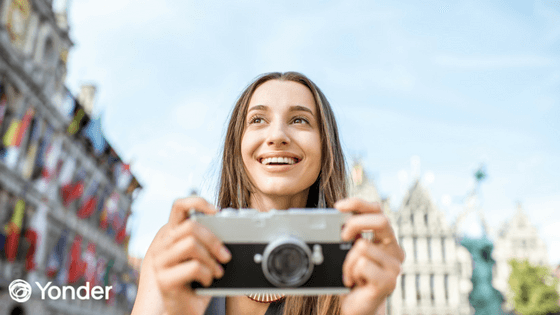 2018 is upon us. Hidden in there among your normal New Year’s Resolutions (go to the gym more often, get a full eight hours of sleep!) is the holy grail of goals: travel the world.

Travel often, travel widely, and travel smart is one of our mantras for good reason. There’s an entire planet out there waiting for you to discover and explore. 2018 is the year for checking off destinations on your list. It’s that simple.

Now, the entire planet is pretty broad. To help narrow your focus a bit, we’ve put together a must-see list for 2018. Read on for our top seven destinations and remember that we have the perfect insurance for wherever your travels take you!

If there is a list of places no one ever plans to travel to, Uzbekistan would be at the top. A former Soviet Union satellite nation, Uzbekistan isn’t well known. It should be, though, because it’s absolutely beautiful.

From ancient mosques to stunning mausoleums to delicious cuisine, Uzbekistan has it all. It gets bonus points for being considered significantly safer than many of its neighbors. We recommend checking out Khiva, a former outpost city on the Great Silk Road that is home to the Itchan Kala.

The city of Samarkand is older than most countries are, and boasts a proud history that extends back to Alexander the Great and Timur the Lame and beyond. Just make sure you’re prepared for this kind of international travel first.

We like to call Toronto the New York City of Canada. It is a booming metropolis that manages to have just about everything you could want in a vacation: cultural attractions like the Museum of Contemporary Art (opening in Spring), Michelin-starred restaurants like Alo Restaurant and George Restaurant, and beautiful outdoor spaces like High Park and Trinity Bellwoods Park.

Our personal recommendation for something to do in Toronto? Take the Distillery District Walking Tour. This fun attraction combines vintage architecture with multiple brewery tastings. You don’t want to miss it, trust us.

Do you know the beating heart of the art world? Here’s a hint: it’s not London or Paris. It isn’t New York or San Francisco. It’s Marrakech, Morocco.

Don’t believe us? Look no further than the YSL Museum, the 1:54 Contemporary African Art Fair, the Matisse Art Gallery, Les Atlassides, the David Bloch Gallery, and many, many more. As if that wasn’t enough, there’s the Marrakech Biennale, a sprawling art festival that happens every two years. The next one is this year. Better get your ticket now before they sell out!

We couldn’t talk about the best places to visit in 2018 and not mention our country’s own slice of paradise. South Florida is nothing less than a tropical heaven located right here in the old US of A. From West Palm Beach’s nightlife to Fort Lauderdale’s tech boom to Miami’s everything, South Florida is where you want to be.

It’s important to point out one point, and we wish we didn’t have to. Timeshare scams are notorious in the south of the Sunshine State. These are often wrapped up in elaborate presentations and can include free dinners or tickets. Don’t worry if you’ve accidentally signed something while enjoying your time in South Florida. Getting out of a timeshare in Florida is easier than most people think.

One of the cooler parts about our backyard getaway is the sheer range of attractions you have to pick from. You can take an airboat ride through the Everglades. You can catch a Miami Marlins, Miami Heat, or Miami Dolphins game. You can check out Wynwood and Art Basel. You can rent a yacht and live like a celebrity. Whatever you want to do, South Florida probably has it covered.

It seems like Nordic culture is taking over the globe. Guess where it all started? In Copenhagen, Denmark, aka where you go if you’re suffering from a bad case of wanderlust.

The Danish capital city is teeming with world-renowned food, drink, and culture. There’s Noma Restaurant, The Jane, Ruby, Tivoli Gardens (the inspiration for Disney World), Christiansborg Palace, and more. If you’re more of a laid back kind of traveler, then make sure to rent a bike and ride around the famous cobblestone streets.

If you are traveling with little ones, then they will have an absolute ball in the Lego store, where you can see some truly creative Lego statues.

Bhutan is where you go to have your breath literally taken away. Located in the foothills of the Eastern Himalayas, it’s a virtually unspoiled haven of stunning views and classic Buddhist monasteries.

There is one important caveat to exploring Bhutan, though. Tourist activity is restricted, so you can’t just hop on a plane and start exploring. You have to sign up for a guided tour package or lay down some serious money on a custom program.

Detroit may seem like a strange choice to round out our list of must see destinations, but just hear us out. After facing financial ruin in the late 2000s, the Motor City has seriously rebounded. It’s home to a crop of hip new restaurants, hotels, bistros, and brands. These include Michelin-starred chef Thomas Lents’ Detroit Foundation Hotel, Angelina Italian Bistro, and the watchmaker Shinola.

One of the coolest parts of Detroit’s reinvention? Many of the newest attractions are housed in other, older buildings. Angelina Italian Bistro, for example, sits in a vintage movie house. The Detroit Foundation Hotel calls a former fire station home.

Whichever one of these seven destinations you pick, you’re going to experience a once-in-a-lifetime trip. Make sure to be prepared for your adventure with the right travel insurance! Contact us today to get your custom quote.